It all started with a rainbow crossing. Everybody told me that it couldn’t be done, it would never be legal and I’d never get it on a road in London. But I did – and it nearly went so horribly wrong.

I maintain to this day that this is probably the hardest thing I’ve ever had to do at work, in the seven months leading up to Pride 2014. There were so many twists and turns in making this happen and it took all my tenacity, resolve and determination to get it on that small stretch of road next to Trafalgar Square.

The story starts in 2012 when Mike Freer MP, wrote to TfL shortly before the dramatically scaled back London EuroPride event following the collapse of the organising committee. He asked us to install a rainbow crossing for Pride in London, and as with all MP’s letters this had to be taken seriously at TfL. I’d been in my role as Chair of TfL’s LGBT Network OUTbound a matter of days and the letter landed on my desk. After some initial inquiries it was a question of a whole raft of legal do’s and don’ts, in this case nearly all don’ts. I duly wrote back to him, and said it was impossible given the timeline and he should contact us against next year.

Fast forward to January 2013, a newly formed London LGBT+ Community Pride (LLCP) formally took over the running of Pride in London. I’d got wind a few days before of the announcement of the new organisers, and through my links with City Hall got in touch with them and asked how we (at TfL) could help. They bit my hand off and we had a meeting to talk through ways in which I could help them put on the event, they weren’t even sure at this time that they would be able to make it happen in time for June.

So a ‘shopping list’ was drawn up; some stuff was easy – like providing training facilities for their 1,000 volunteers to much harder stuff, including a request for a rainbow crossing. I’ll be honest I didn’t really think about the symbolic importance of a rainbow crossing at the time, the idea was still relatively new and I felt I should get the basics right first.

Right on queue Mike Freer write back to us shortly after this, and reminding me that I had asked him to do so. So here was my dilemma – how do I undo planning laws that disallow anything other than a black and white crossing? Through contacts in TfL it looked like it was completely impossible, and above all somebody had to pay for it. Given the intense scrutiny that TfL is under I could see that this was going to take some time, and with only 3 months to go to Pride I didn’t believe I could find a way of doing this, and doing it properly.

Typically for me, I turned this into an opportunity. In 2013 the same-sex marriage law was passing through parliament and the final hurdle wa

s taking it through the Lords, and it was to happen just before Pride in June of that year. I wrote back to Mike and said it would take more time to make this happen, but would he like to come in and talk to my network about his life as a gay MP, and the importance of same-sex marriages. I’d also for the first time in TfL’s 150-year history, organised for a rainbow flag to be flown over our iconic office at Broadway in Victoria, I suggested that he attend on the same day we did this, the day before Pride in London.For whatever reasons my moons aligned on that day,Mike was in London and was happy to do it. 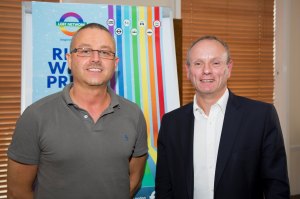 So the event  went ahead, Mike was fantastic warm, personable and we had a packed event. I knew however that he wasn’t going to leave empty handed. After the event he said ‘When are we going to get a rainbow crossing in London?’, without flinching (or possibly thinking) I said ‘I promise you Mike, I’ll make it happen next year’. Now I know I’m in trouble, not only have I promised something that I don’t know could ever happen, but where do I even start?

I won’t bore you with all the initial shenanigans, but all I can say is that at every stage I used the famous line ‘…but Mike Freer MP has said it must happen!’ A small embellishment perhaps but it was enough to start getting the idea traction. By January 2014 I had a sponsor – Applied Media who would produce a bespoke, fitted and movable crossing to my own design all for free (or so i thought at the time). I pressed ahead, and with my Deputy Chair Ben Lyon we scouted for possible locations.

The big worry for me was I wanted it to look as authentic as possible, in a location where it could be down for longest. We couldn’t have it on an open or live road, but as Pride in London closes many roads it was possible to lay it down on one of those and take it up after the event finishes. Initially I chose opposite Portman Square (left), on Baker Street because that where the floats assemble and I thought would be closed the longest. I brought Applied Media down and we did a site survey and all looked good. This proved to be the easy part.

I advised Pride in London we were going to do this, and they were excited that this would be a London first for the event.The issue for TfL however is that although we’re providing the crossing, it’s not on a road we own and we therefore need to work with the relevant council. In this case it was Westminster and so I joined meetings with all possible stakeholders, including London Buses, the Metropolitan Police, LLCP, Westminster,City Hall and Underbelly – the events management company employed by LLCP. I was however pushing against open doors; everyone wanted to do it but everyone had their own view on where it should be placed. I was then invited to speak at a meeting at City Hall where I should set out my case.

I attended the City Hall meeting in early May, they loved the idea but hated the location. I was to go back and find another location. Two possible locations were mooted; Lower Regent Street where the parade could pass over it or opposite Cockspur Street next to the fabulous vista of Trafalgar Square where the main event is held. 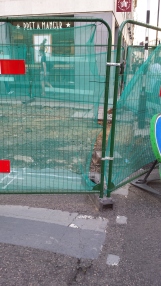 both locations shortly afterwards, mindful that time was fast running out. Lower Regent Street was a building site (left), impossible to take measurements for the bespoke fitting and was an immediate no-brainer. The second site was perfect however, very similar to the Portman Square site but with a much better view and I agreed that this would be a great location. I brought the contractors down again and we took all the measurements and I then set about the next task of advising people the location, and getting our in-house design team to produce the artwork.

Thinking that my work was done I foolishly booked a holiday two weeks before Pride. I was exhausted by this to be honest and needed a break with my husband, whose birthday it would be on 14 June. At the beginning of June Underbelly contacted me to discuss the crossing’s location. They wanted to see if it could be moved to Regent Street, I knew it couldn’t but agreed to do a walk from Oxford Circus to Trafalgar Square to look at both locations, and possible alternatives to those. Regent Street was still a building site, expected to be cleared in the week before the parade but with no guarantees. Although Cockspur Street wasn’t their preferred location they agreed it was a great alternative.

Press releases were prepared, the designs were signed off by our Pride Event Team and the crossing went into production Mike Freer was delighted and what could possibly go wrong?

A week before I went on holiday a panic phone call came in from my colleagues in Surface Transport. Someone up high (not in TfL) had decided the location was not suitable, and yep it needs to moved to the building site in Regent Street! Suddenly my world crashed around me. I had to leave the building and immediately burst into tears. I’d worked so hard to make this happen, and now everything I had done was being undone by people who did not understand the complexity of what I was doing. They thought we were slapping a bit of paint on the road, and we put it on any old road (that we don’t own) in a matter of hours before the parade.

So it was me versus ‘them’. All I can say is that for the first time in this project I felt isolated but I had done my homework.- I’d taken pictures every time I’d visited both sites. I’d fastidiously documented each time I’d done site visits, and my work paid off. TfL, and in particular Leon Daniels, Managing Director of Surface Transport backed me and my decision 100%.

Whilst I was on holiday there were many frantic emails and exchanges, but moving it was the difference between making something happen and not happen. My husband constantly berated me as I sipped cocktails on the beach and sneakily responded to the latest exchange on my BlackBerry.

When I got back it was as if none of this had happened. It was the week before Pride I was in my usual crazy mode because not only am I doing this, but I’m organising our entry into Pride with Ben – and that’s no mean feat with around 100 people and a bus for our part in the parade.

Finally, on the day before Pride, Simon from Applied Media rang me. He seemed unusually sheepish, he said ‘We’re all on for deliver and fitting the crossing tomorrow. I’m sorry to talk money, but how do you want us to invoice you?’. I nearly fell off my chair. ‘Pay for it? I thought you were sponsoring it!?’. It seems the two people that had put us in touch from both organisations hadn’t actually formally agreed the sponsorship! If there hadn’t been so many twists and turns I think I’d have thrown myself out the window.

Within a matter of hours the issue was resolved; WJ Linkline who own Applied Media agreed to sponsor, and I could stop sweating.

So this is how gay London almost stopped itself from having a rainbow crossing, a six meter by two meter movable half centimetre bit of polymer and rubber, with a rainbow on it. I’m glad I did it, it’s taught me so much about how that fact that if people don’t get what they want from you they’ll try go around you. Thank heavens that I work for an organisation that backed me all the way.